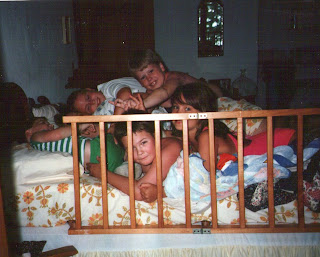 A few weekends ago we were sitting around telling stories, laughing and generally having a good time when my best friend said “Have you told them the story of when we broke the bed?”  She loves to do that when there is someone new in the room. I had not told this particular story to present company but of course the minute she mentioned it they were intrigued.  Honestly I hadn’t really planned to tell this story on my blog. It’s a long one and while it’s funny to those of us who were there,  I’m not sure it has broad comic appeal.  However, today I was looking through pictures trying to find something for the story I had intended to tell when I came across this.  This picture was taken a few seconds before the 100 year old antique bed we were on gave out and hit the ground like a ton of bricks.
Telling this story is bittersweet because one of these beloved children isn’t with us anymore.  One day I’ll tell you that story but not today.
Don’t be fooled by these smiling faces.  They are the faces of children who will abandon you the minute the going gets tough. The one holding the camera is the same friend who dragged this story out of me around the dining room table not long ago.  She is the mother of two of these hoodlums.  The other three are mine.
My first husband’s parents owned a house on beautiful Smith Mountain Lake in south western Virginia.   It is the only thing I miss from that marriage. The place is picturesque. The house is furnished and decorated with antiques.  You have to use a step stool to get in to the beds.   I loved it at the lake house but I was always a nervous wreck when my kids were small worrying that they would break something. 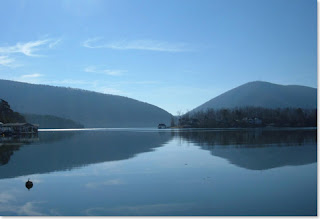 We made a quick trip back to the hardware store for nails, wood glue and a hammer and then went back to the house to fix a bed.  I am proud to say that bed will never break again.  There are so many nails in it and so much glue on it that it is easily 10 times stronger now than it was before it broke. It’s been  about 17 years since then and so far as I know our repair still holds.  If anyone ever decides to climb under that bed they will be in for a surprise but it’s not my worry any more.

The morning we were getting ready to leave my friends son came to us and admitted that he had broken an antique plate that had been sitting on the dresser in his room.  I looked at her and said “I got the band aids, go get some of that dang glue.”  Piece of cake.