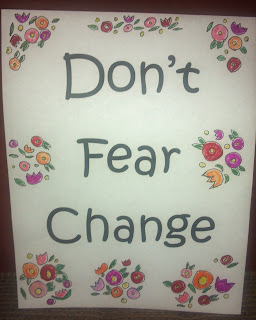 A week or so ago, one of my schools had their end of year staff meeting.  Each grade level made a presentation reflecting on the year. Some were funny.  Some were sentimental.   My favorite one was the fifth grade which had each of their students make a poster using only three words to describe their year. They took a picture of each student holding their poster and put all of the pictures together in a slide show.  I don’t know these kids but I laughed and cried like I did.  The pictures and the messages were priceless. Their posters said things like “Ready to shine” and “Good memories forever”.   A few were really funny like the one that said “Did some work” and “I’m outta here”.  The most memorable one for me was the immigrant child with the poster that said “Finally I’m Free”.
This got me to thinking about what my reflection poster would say about this last year.  This is what I came up with.

Most of my life I’ve been uncomfortable with change. I have craved stability and sameness.  Maybe it was my tumultuos childhood, maybe it’s just the way I’m wired but change has always been a little bit scary.  So scary, that I stayed in an unhappy marriage for way too long.  There is comfort in our daily routines and knowing what to expect.  I like feeling in control.  In fact I’ve been accused of being a control freak. Not sure I’d go that far (ok, maybe I am) but I like my little stable world. 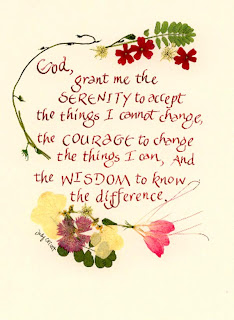 The last few years however I’ve had to reexamine my thoughts on change and acceptance.  I have learned that there is very little in life I can actually control.  A series of health problems, family tragedies and personal hardships put me in a tailspin.  As I struggled to make sense of my life that seemed to be spinning out of control I latched on to this familiar saying. In fact I printed this and put it strategically around my house and at work.  While I give a lot of credit for helping me deal with painful life experiences to a wonderful counselor, I also have to give credit to this simple powerful little prayer.  If you are familiar with the origins of this verse you’ll know that these words change lives.  Over time my attitude began to change. I found myself saying "it is what it is" more often. My whole life I'd been a worrier until the day I realized worrying was like rocking in a rocking chair.  It'll pass the time but it won't get you anywhere.  I conciously decided to stop worrying about things I couldn’t control and to take control of things that I could…like my attitude, my health, and my finances.  I had to learn to accept things as they were. I had to accept that when someone else says "you're not the boss of me" they are absolutely right.  I am only the boss of me.  My thoughts, my feelings, my actions and responses are the only ones I control.  What a difficult thing this has been for this old hard head to learn.

A year ago I was really struggling with arthritis in my knees.  Taking care of a very large high school was taking a toll. I had toyed with the idea of asking for a reassignment but fear held me back.  I had been at the same school for seven years.  That’s a long time.  I had friends there.  I was comfortable there.  That’s when I had to ask myself if I was truly living by the words that had become my motto.

As it turns out I did change schools and it has been a good thing.  Everyone says “the grass isn’t always greener on the other side” but you know what…sometimes it IS. Sometimes change is good.  Sometimes not knowing what might happen next in your life is exciting.  I tell my son all the time “If nothing changes, then nothing changes.”  I’m usually telling him this as I lecture him about getting a better job and informing him that he can’t live in my basement forever but hey, it applies. As someone once said…We can’t sail on to new challenges if we’re afraid to lose sight of the shore.
So my reflection for this last year is "Don't fear change." because seriously…if the only thing you change on a regular basis is your underwear we need to talk.
“Getting over a painful experience is much like crossing monkey bars. You have to let go at some point in order to move forward.” -C.S. Lewis