I Love Being Grandma

A few years ago I heard a quote that said “the reason grandparents and grandchildren get along so well is they have a common enemy.”  I know it was meant to be funny but I thought it was horrible.  It certainly wasn’t my experience with my grandmother, or even my mother when she became grandmother to my children.  It certainly does not apply to my daughter.  If anything Riley and I are bonded in our complete and total adoration of her.  I have realized that since she became a mother she needs my support and encouragement now more than ever. Being her mother doesn’t suddenly take a back seat once she becomes a mother herself.  I try to do everything I can to nurture and help her so that she can be the best Mom she can be.  If it means taking him for a few hours so she can go on a date with her husband, take a nap, go to work or whatever she needs to do I try to always be there.

I have heard people say “I don’t babysit my grandchild because I don’t want to be taken advantage of.”  I don’t understand that. I have never once minded having Riley over at my house.   I don’t honestly consider it babysitting when I do have him.  We have play dates. Speaking of “babysitting” why is it that when anyone other than a child’s mother is caring for him/her it is considered babysitting?  It drives me insane when I hear a dad say “yeah I can’t go out because I’ve got to babysit the kids tonight!”  You what?  Are you getting paid for it?  Are they not your own children?  Does your wife call it babysitting when she takes care of the kids? Here I go off on a tangent but it’s a real pet peeve of mine.

A friend of mine plies her grandchildren with candy every time she seems them.  I mean she drowns them in it. My daughter would kill me if I did that. My son in law would cut me off from visits. They don’t allow him to eat much candy and whether or not I agree with them it’s my job to back them up, not undermine them.  The same goes with discipline and potty training and whatever lesson they are trying to teach.  Which gets to the heart of what is so wonderful about being a grandparent….the only thing I have to do with this kid is love him.  That’s it. It’s not my job to be sure he brushes his teeth and picks up his toys and gets good grades. His mother and father get that responsibility. I get to be his friend, his confidant and his greatest admirer.

My mother used to have a bumper sticker that said “If I knew grandchildren would be so much fun I would have had them first.”  My sister was a little offended. She doesn’t have children though, and unless you do it’s kind of hard to understand the sentiment. I thought it was sweet since the grandchildren she was talking about were mine but now that I’m a grandmother myself I couldn’t agree more. There is something just so wonderful about spending time with this kid. He never fails to be the best part of any day that includes him. Whether we are making cookies , playing with sock puppets, or going to the playground, it doesn’t matter. We are making memories that will forever be precious to me.

One day he’ll be a teenager and lots of other things will be more important than spending time with his old grandma but right now I am soaking up every minute I can get. He recently told his mother that he loves coming to my house because “my grandma always plays with me.”  And that ladies and gentlemen is what I live for….

"Grandchildren are the dots that connect the lines from generation to generation." ~Lois Wyse

King of my Heart
I haven’t written much about my grandson yet because honestly how do I condense my feelings for this child into three or four paragraphs?  After all he is the reason I started this blog. One day when I'm not around anymore (a very long time from now) he will have this.  The stories I share here are for him. 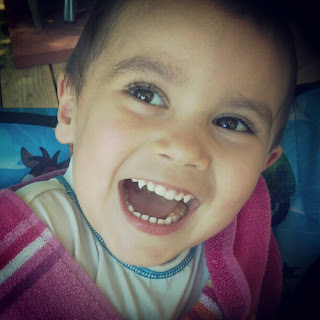 I’m very lucky because I get to see him regularly. Thank goodness for that because he is like air, water and sunshine to me.  I could not survive without him.  He spent the night last night. My chores didn’t get done. There are still toys on the living room floor.  I slept with little feet digging in to my back and four stuffed animals dogs.  I’ve been up since the sun “woke up” and will probably be in bed by nine.  I don’t care about any of those things.   I was just as disappointed as he was when his mother showed up today.
I love my children fiercely, but this thing that Ry and I have going on is different. We are best friends in a way that only grandmothers and grandchildren can be.  I don’t even think it has anything to do with me being his mother’s mother.  In fact when I tell him “I am your Mommy’s Mommy” he says “No you aren’t, you are my Grandma, Grandma.” 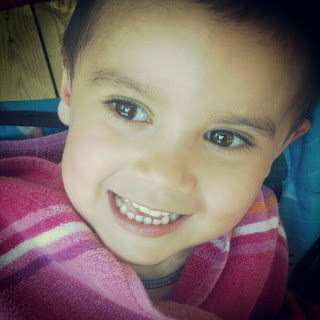 When he was a baby I would hold him for hours, burying my face in his neck, inhaling his sweetness. When he was a toddler my ears begged for the sound of his laughter.  Now he is three and has found his voice.  The things he says to me bounce around in my head for hours after he has gone.  He told me today that he had something to tell his mother when she got here.  I asked him what he wanted to tell her and he said “I’m going to tell her to turn around and go home without me.” 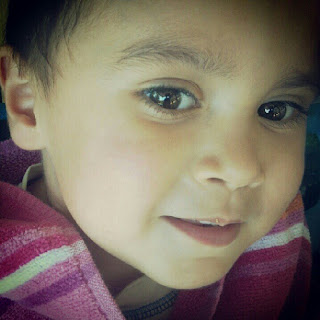 When he was born he stole my heart and every day I get farther and farther from ever getting it back.