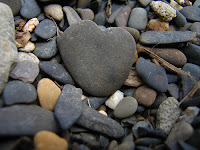 I like rocks. I’ve always had a thing for them. I have a bunch of them in my jewelry box and other places around the house.  I’ve been accumulating them for years.  I have a pretty decent sized one in my glove box. My family refers to it as my “rape rock” meaning if someone menacing ever comes near me they are going to get a rock upside the head.  You can do many things with a rock.  Did you know that if you are hiking in the woods on a hot day and you run out of water you can put a small stone in your mouth and it will help alleviate your feelings of thirst?  I learned this from a scout leader on an actual hike in the woods.  I didn’t put a rock in my mouth when she suggested it because I wasn’t actually dying of thirst; however this crazy lady was popping them in her mouth all day long. She only took it out when she wanted to eat her GORP.  (GORP = good old raisins and peanuts which by the way would make you more thirsty in my opinion) Every time she said “Want some of my gorp?”  I would seriously crack up. There may be a reason none of my kids stuck with scouting.

The other day my husband I were shopping at a small hardware store and we saw this fake rock that you would put in your garden.  It said “Grandpa’s Garden.”  We both had an “awww” moment because he’s a grandpa and he loves being a grandpa. However we both agreed that the decoration on it was kind of hideous. It had a scary looking ladybug and I think that ladybug’s should always be cute.  It was also covered in flowers which for a Grandpa’s rock was a little girly if you ask me.  My last complaint was that it was plastic.  I mean if you’re going to put a rock in the garden put a in the garden.   “Cute idea but I can make something just like it on a real rock for free!”  I told him.
I’m always admiring oddly shaped and cool looking rocks outside of restaurants, stores or anywhere else they are used in landscaping or are there naturally.  I’ll pick one up and say “oh look, I like this one” and my husband will say “Put it back, you can’t take it.”  To which I argue, “It’s a rock, who really owns a rock? The earth?  The universe? Applebee’s?
Until Saturday that is….
We saw that plastic rock at the hardware store and it changed something. As we turned in to our neighborhood we drove past the community center.  They have these medium sized landscaping rocks all artfully arranged with flowers and bushes.  I looked at him and said “That would be the perfect size rock for your garden.”  I fully expected his usual response. Instead he grinned at me and whipped the car in to the community center driveway and said “Quickly.”  I jumped out of that car so fast it was a thing of beauty.  It took me only a moment to find the perfect one.   I was back in the car within seconds.  As we drove the last minute up the street to our house I held the rock to my cheek to feel its warmth. Few things feel as good in your hands as a sun baked rock.  We took it home and I painted it.  Not my best work by any measure but this little rock means something to me.
I know it’s a silly thing to be proud of someone for helping you steal a rock but I am.  My husband has a stressful job and I’ve been trying to get him to relax a little more lately.  When he pulled accomplice to one of my capers, he gave himself completely to the moment. For someone who has a hard time with that, this was HUGE.
Hey honey…how’s your throwing arm?  I haven’t been toilet papering in years.