Legal Notice
PUBLIC NOTICE is hereby given on this date, June 9, 2012 to the three adults who reside with Felicia Agnew in their Woodbridge Virginia home.  Those individuals shall henceforth be known as “housemates.”  Felicia Agnew, who shall henceforth be referred to as “The complainant” alleges that this Cadbury Caramel Easter Egg (which shall furthermore be referred to as Exhibit A) has been sitting undisturbed in the fruit bowl since approximately April 8, 2012.  The complainant alleges that an unidentified “housemate” has abandoned Exhibit A and would like Exhibit A to be declared as unencumbered property.  The complainant would like to assume possession of Exhibit A immediately.  Any claims that are to be made in regards to this case must be submitted by midnight of June 9, 2012.  Proof of ownership must be presented.  At the expiration of this notice, Exhibit A will become the personal property of the complainant if no other petitioners come forward.  Once complainant has assumed possession of Exhibit A all evidence will immediately be consumed destroyed. 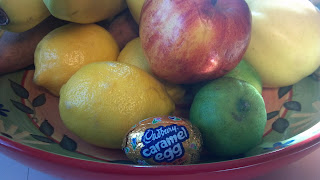